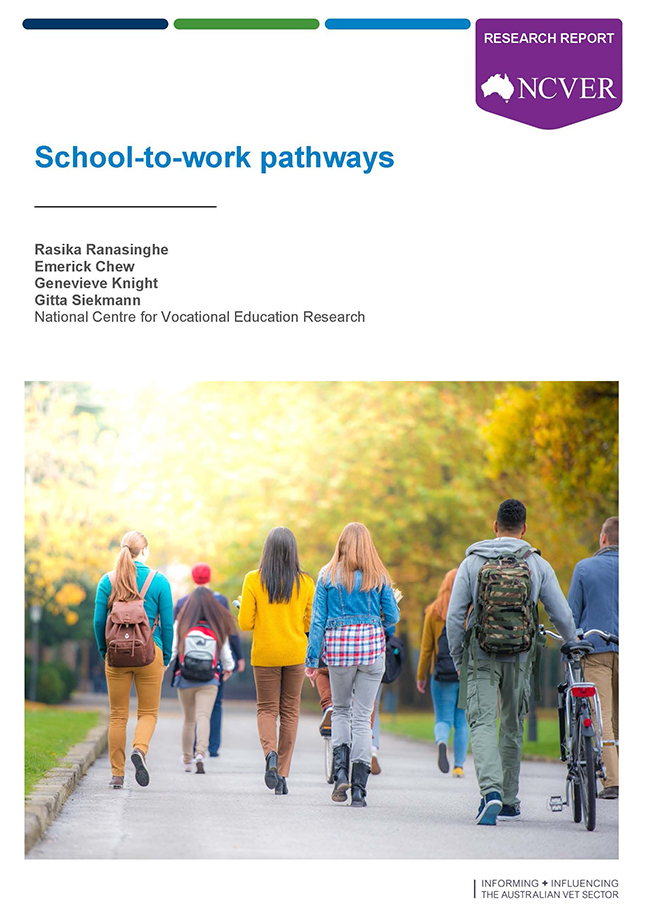 This study explores the school-to-work transitions of youth aged 16 to 25 based on the 2006 cohort of the Longitudinal Surveys of Australian Youth (LSAY Y06). Five pathways were identified using sequence analysis combined with cluster analysis. While the majority of the young people in the study sample followed a mostly simple higher-education-to-work pathway or early entry to full-time work, the remaining quarter of the sample experienced varied and complex transitions including frequent switching between higher education and VET activities, episodes of part-time work and repeatedly disengaging from the labour market. In pathway 2, VET gave an early route to full-time work that resulted in full-time work for 97.4% at age 25.

It is well established that a successful transition to the labour market has long-term social and economic implications for both individuals and society. However, the journey from school to the world of work is not straightforward and needs to be better understood.

Based on data from the 2006 cohort of the Longitudinal Surveys of Australian Youth (LSAY Y06), this research explores the school-to-work transitions of Australian youth aged 16 to 25 years. The study uses sequence analysis in combination with cluster analysis to summarise complex longitudinal data in a meaningful way and to investigate transitions in their entirety as ‘pathways’.

This study captures the richness of the transition experience, both visually and analytically. Identifying the five key types of pathways taken by young people on their journey from school to work, this research describes these pathways and the implications of their evolution for labour market destinations over the 10 years from 2006 to 2016, when the cohort was aged 25 years.

The passage into work is a critical phase in young people’s lives, with long-term implications for the future labour market and for social outcomes. An evolving labour market adds to the complexity of trajectories, further confounding youth transitions and highlighting the importance of understanding transitions as a process.

In this context, the current study has the following objectives:

The analytical approach used in the study combines sequence analysis and cluster analysis in order to identify similarities between activity patterns. It enables the study of labour market transitions as a sequence of activities and exploits the longitudinal nature of the data by using a series of graphical representations, these providing a direct visual insight into the patterns of transition within each pathway. To accompany this report, an interactive data visualisation, Visualising school-to-work pathways using LSAY, presents the school-to-work pathways of young Australians aged 16 to 25, and can be accessed from <https://www.ncver.edu.au/research-and-statistics/school-to-work-pathways>.

This study is based on data from the 2006 cohort of the Longitudinal Surveys of Australian Youth (LSAY Y06). LSAY is a nationally representative survey that tracks 15-year-old students as they move from school to further education or other destinations until they are 25 years of age. The survey captures detailed information on education activities and employment, as well as socioeconomic and demographic characteristics, making it ideally suited for this analysis. The study sample is limited to the 3186 individuals who completed each annual survey until 2016. While analytical and data constraints limit the ability to generalise the results of this study, the initial LSAY sample is representative of the youth population of Australia and thus is useful in providing important insights into their transition pathways.

The five pathways taken by young Australians between the ages of 16 to 25 years as they transitioned from school to work are:

This represents the largest group (60% of the sample) and encompasses an extended period of post-school higher education, followed by employment.

This is an ‘express pathway’ to employment and includes apprenticeships and traineeships. This pathway comprises a relatively short spell (14.3 months on average) of post-school education or training, leading to full-time work (23% of the sample). For many respondents, however, it is likely that training jointly in combination with full-time work extends beyond early post-school years, as part of an apprenticeship or traineeship. Young people in this pathway have the fastest entry to employment and also spend the longest time in work.

This pathway comprises an extended period of higher education and VET activity, eventually leading to more stable employment or further VET activity (8% of the sample).

This pathway is characterised by multiple and repeated labour market movements and disengagement, indicating tenuous labour market attachment (5% of the sample).

This represents the smallest group (4% of the sample), a group characterised by relatively early entry to the labour market and mostly employed part-time over the 10 years.

The role of VET in youth transitions

The modelling suggests that a number of factors influence pathway choice, with school education and achievement playing key roles. The modelling shows that studying a vocational subject at school age is a significant positive factor in all non-academic pathways, in particular raising the probability of the more employment-oriented Pathway 2 by 13 percentage points. Attaining less than the top school maths and reading achievement by age 15 years also raises the probability of Pathway 2.

Males are more likely to follow Pathway 2, with a probability of 14 percentage points higher, and have lower chances of taking Pathway 1, Pathway 3, and Pathway 4.

Further modelling relating to Pathway 3 enables greater understanding of the factors determining which type of VET pathway is followed. The modelling confirmed that the relative likelihood of following Pathway 2 which had the highest rate of apprenticeships/traineeships was mostly increased by studying vocational studies in school but was not associated with school maths or reading test achievement. However, being male increased the chance of Pathway 2 by 2.9 times and having the most disadvantaged socioeconomic background increased the likelihood of this pathway by 1.6 times.

The transition pathways uncovered in this study confirm that, for some young people, by providing training opportunities for them, VET is an important means for facilitating pathways to the labour market. This is particularly true for young people in Pathway 2, where VET gave early entry to employment (mostly males), and for those in Pathway 3, who had an extended period of mixed VET and higher education activities (mostly females). Pathway 2, whereby VET provided a direct route to employment, resulted in 97.4% in work at the age of 25 years, the highest for any pathway. Note that in this pathway VET training started within school and extended beyond early post-school years but was mostly in combination with full-time work as part of an apprenticeship or traineeship.

This research, which summarises complex information relating to 10-year transition pathways, demonstrates that young people’s post-school pathways are diverse, individualised and complex, underscoring the importance of understanding youth transitions as a process. The research also revealed the significant avenue offered by vocational education and training for those young people exploring alternative non-academic pathways.

This data visualisation presents the school-to-work pathways of young Australians aged 16 to 25. The… Show more

A new analysis reveals five main pathways taken by young Australians as they transition from school to further study and work, according to a report released today by NCVER. Show less