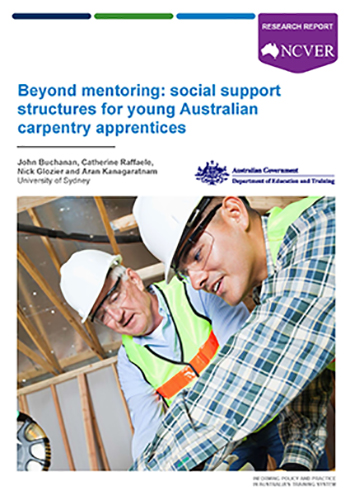 With growing recognition of the extent to which work, mental health and wellbeing intersect, it is important to understand the critical role effective apprenticeship support arrangements play in helping Australia's youth make the transition from school to work. This study considers how pastoral care, mentoring and other forms of social support contribute to apprenticeships. In particular, the forms of support provided to young carpentry apprentices by some of Australia's leading construction firms and training organisations were investigated. It finds the best and most effective support for mental health and wellbeing is informal. While these can be the most difficult forms of support to explicitly and formally nurture, the report and good practice guide offer ideas on how informal bases of support can be encouraged to flourish.

This study is an exploration of the work-based social support structures associated with the transition from school to work for young people and how these could, potentially, contribute to better mental health and wellbeing outcomes. Research and policy concerning young adults and mental health tends to focus on ‘at risk’ individuals; this project, however, examines more broadly the important role of the workplace as a potential site of social support. It also draws on and contributes to broader debates about the apprenticeship model in Australia and notions of vocational development. The findings have been generated from a literature review and eight case studies involving both small and large organisations across some of Australia’s leading firms and group training organisations, specifically those with apprentice completion rates sitting at around 90%, well above the industry average. The report identifies the forms of social support successfully provided to young carpentry apprentices.

This research focused on how apprenticeships, at their best, provide extensive social support for young people. It draws on, and contributes to, debates about workforce (and especially vocational) development in contemporary Australia. It also contributes to the growing literature on social support and health, especially the role that work could play in improving the mental health of young people. Specifically, it identifies the forms of social support provided to young carpentry apprentices. Findings have been generated from eight case studies, which included smaller organisations and some of Australia’s leading construction firms and group training organisations (GTOs).

The findings were as follows:

This research shows that the best and most effective support for apprentices is informal, which is, by definition, difficult to explicitly and ‘formally’ nurture; this is a conundrum that needs to be addressed if policy is to ensure that work-based arrangements provide quality social support to help young people successfully navigate the transition from school to work.

Even when internal support structures function well, sometimes arrangements that are formally separate from the workplace are required to provide a ‘safe environment’, where sensitive issues, such as those concerning mental health, can be discussed.

Given these findings, the best strategy would appear to be the promotion of an ecology in which strong informal bases of support can flourish. On the basis of this study, the ecology that most obviously meets this need is the expansive variant of the apprenticeship model of vocational development. Expansive workplace learning situations are those in which: time for on- and off-the-job training is valued; the transition to full and rounded participation in the trade is seen as a gradual process; and time for innovation is regarded as important. This approach is contrasted with restrictive workplace learning situations, where: virtually all training takes place on the job and there is little time for reflection; there is a preoccupation with making the transition to full competence arbitrarily quickly; and time for innovation is not respected.

An integral part of any programmatic intervention is the provision of mentors who are formally separate from the employer and the workplace — as a complement to (not a substitute for) expansive apprenticeship arrangements. Refining formal mentoring programs is of second-order importance. The key challenge is to revitalise and renew the apprenticeship model of vocational development by ensuring that apprenticeships are based in organisations providing expansive workplace learning situations.

Apprenticeships provide a vital pathway to employment for Australia’s young people. Despite this the… Show more

Apprenticeships provide a vital pathway to employment for Australia’s young people. Despite this the number of apprentices completing has declined in recent years. A new study finds the apprenticeship model is effective when employers and educators follow best practice and recognise the value of social support structures for apprentices. Show less