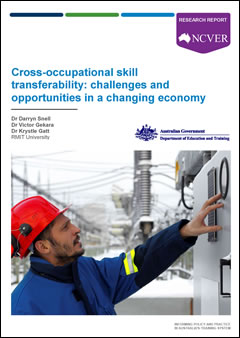 Cross-occupational skill transferability: challenges and opportunities in a changing economy

It is found that transferable skills perform an invaluable role in an employee’s cross-occupational mobility. However, there is more that can be done to improve recognition of transferable skills, as well as the way they are developed in the training system and understood in the labour market.

Industries, and the occupations encompassed by them, are susceptible to many influences, such as fluctuations in the Australian dollar, trade agreements and the emergence of new technologies and ways of working. A recent example of these changes is the decline of the auto manufacturing industry in Australia; closures in this industry have resulted in increasing redundancies leading to many people seeking work. In order to better understand where individuals in these situations can find work, this research looks at the transferability of skills between occupations at the same skill level. In order to do this, the research identifies growing and declining occupations across Australia, assesses how the vocational education and training (VET) system develops transferable skills and explores how workers facing retrenchment understand their transferable skills.

For further research in the area of structural adjustment, see Victor Callan and Kaye Bowman’s publication, Industry restructuring and job loss: helping older workers get back into employment, and John Stanwick et al.’s The end of car manufacturing in Australia: what is the role of training?. Both reports were published by NCVER in 2015.

This study arose from concerns in policy and academic debates relating to the most appropriate means of responding to Australia’s rapidly changing economy. The major industrial transformation that has taken place in this country in recent decades has resulted in the decline of some established industries (for example, manufacturing) and the growth of others (for example, health and community services), simultaneously causing job loss and skills shortages. It has been argued that in situations such as this cross-occupational mobility provides the vital flexibility that enables employers and workers to meet varying employment demands (Bernhardt et al. 2001; Sabirianova 2002). Such a perspective calls for a clear understanding of the concept of and potential for cross-occupational skills transferability between declining and growing occupations, as well as an awareness of how it currently works in practice. This study, therefore, has aimed to highlight the barriers and enablers to skills transferability, while exploring the potential benefits from its effective development and utilisation.

A particular emphasis of the study is on the role of transferable skills (that is, those that can be adapted to different jobs, occupations and industry settings) in cross-occupational mobility during times of industrial restructuring. All workers possess transferable skills to some degree but their awareness and understanding of these skills varies considerably, which limits their ability to see how these skills can be applied to different occupational contexts. The study also explores how effective skills transferability can be managed during employment transition and the ability of the vocational education and training (VET) system to produce transferable skills.

The study adopted an integrated multi-method, multi-stage approach, comprising both qualitative and quantitative instruments. The primary intention was to capture:

Data were collected and analysed in three integrated stages. In the first stage a secondary analysis of data from the Australian Bureau of Statistics (ABS) Census and labour force surveys was conducted to determine how the Australian economy has changed over the past decade, with specific reference to declining and growing industries and occupations. Stage two involved an in-depth examination of the design and content of selected qualifications associated with the identified declining and growing occupations, the aim being to determine the extent to which the VET system facilitates or impedes cross-occupational skills transfer. In stage three a qualitative case study analysis was conducted and involved documentary analyses and semi-structured interviews with workers, employers and representatives from unions, the training system and job support agencies (for example, Jobactive) to examine how skills transferability works in situations where workers are confronting uncertain occupational futures.

A number of key findings emerged from the investigation into the three broad areas of research interest: the occupational consequences of recent industrial restructuring; the role and capacity of the VET system in cultivating transferable skills; and the role of transferable skills in assisting disadvantaged workers to access new occupational opportunities.

The Australian economy has undergone significant transformation and industrial restructuring in the past two decades. The analysis of the 2006 and 2011 ABS Census data reveals that many traditional industries, especially in manufacturing, have declined and are increasingly being replaced by service-oriented sectors such as health care, education, hospitality and retail. This transformation has resulted in employment loss and the need for new work in vastly different occupations; for example, automobile manufacturing workers seeking new employment in hospitality. Furthermore, the decline and growth in the various sectors and occupations varies between regions, presenting different types of cross-occupational mobility challenges.

The analysis of the content and design of VET qualifications and their parent training packages reveals that the VET system possesses a reasonable capacity for supporting the development of transferable skills — those skills with the potential to facilitate the occupational mobility of workers, providing them with the flexibility to change jobs across a wide range of occupations. However, the specific ways by which the key employability skills are interpreted and built into different qualifications may limit the extent of their transferability.

The study, however, finds that, in addition to employability skills as the determinant of transferability, the system also embeds certain key competency units whose application cuts across a broad range of qualifications. Ultimately, greater skills transferability and employment mobility could be achieved with more generically constructed employability skills, combined with flexible technical skills specific to occupational clusters.
The importance of ‘soft skills’ (ability to operate effectively in the workplace) and generic skills, as well as personal attitudes and work ethics, was confirmed by employers and employment facilitation agencies. These skills were recognised as perhaps being the more important transferable skills in recent times.

In stage three of the study, two regional case studies (Geelong, Victoria, and the Latrobe Valley, Victoria) were conducted to determine how workers who confronted uncertain occupational futures understood their transferable skills, and the role of the training sector and employment facilitation agencies in assisting these workers identify the transferable skills that enabled their access to cross-occupational mobility opportunities. The majority of the workers interviewed did not have a comprehensive understanding of the full range of their skills and their transferability. Most of these workers tended to be unskilled or semi-skilled, had known only one employer throughout their entire working lives, had little if any formally accredited training, and had previously never had to consider finding another job.

Workers who did have an understanding of their transferable skills tended to belong to higher-skill occupations (see support document 1 for ANZSCO skill levels analysis), often held a variety of qualifications and had worked for different employers. Skilled workers employed on short-term contracts for contract firms could more easily identify and differentiate their transferable skills (that is, both soft skills and generic technical skills) and specific technical skills.

The dominant challenges in transitioning the displaced workers studied therefore include a lack of formal qualifications, poor understanding of their skills and their transferability value, leading to a general assumption that their skills are not transferable, and they have a lack of basic job market navigation skills.

A wide range of actors often become involved in the efforts of transitioning retrenched workers into new jobs. However, how well these players understand and apply the concept of skills transferability when designing their assistance to displaced workers is questionable. In the cases studied, only one company (Ford Australia) provided a comprehensive transition program which included skills transferability elements.

The findings from this report lend further support to the view that transferable skills perform an invaluable role in an employee’s cross-occupational mobility (Partridge, Chapman & O’Neil 2009; European Commission 2013; Mayer 1992; Misko 1998; National Quality Council 2010; Skills for Jobs 2013; Sweet 2009). However, a number of factors must be taken into consideration when understanding skills transferability and cross-occupational mobility, including:

For the development of policy in this area, the study suggests:

The vocational education and training sector plays an important role in helping displaced workers find jobs, but is there more that can be done? Show less