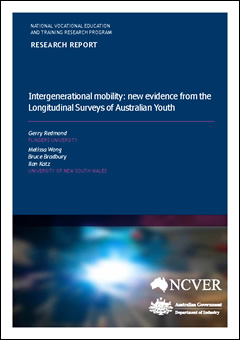 This report examines the extent of changes in intergenerational mobility in Australia since the 1970s using data from the Youth in Transition (YIT) study and the Longitudinal Surveys of Australian Youth (LSAY). Students’ educational achievement in literacy and numeracy tests at age 14—15 years and their tertiary entrance rank (TER) at age 18—19 years in the context of their parents’ socioeconomic status (SES) are also examined. The analysis takes into account, in broad terms, developments in educational, social and economic policies over that time and previous studies. The analysis suggests that in general intergenerational mobility has not changed. While overall educational achievements have improved, the connection between parents' relative socioeconomic status and their children's relative academic performance has not weakened since the 1970s, although the strength of the relationship between school socioeconomic status and student outcomes appears to have increased significantly since 1975.

A recording of the webinar Intergenerational mobility: new evidence from LSAY held on 18 June 2013 is available for viewing from our Webinar series page.

A measure of the efficacy of educational systems in Australia and internationally is that young people’s educational and employment achievements should result from their efforts and abilities rather than from their family background.

This report examines the extent of changes in intergenerational mobility in Australia since the 1970s using data from the Youth in Transition (YIT) study and the Longitudinal Surveys of Australian Youth (LSAY). The report investigates the ranking of children’s educational achievement in literacy and numeracy tests at age 14—15 years and their tertiary entrance rank (TER) at age 18—19 years in the context of their parents’ socioeconomic status (SES). The analysis takes into account, in broad terms, developments in educational, social and economic policies over that time and previous studies (which indicate mixed results on the extent of intergenerational mobility in Australia).

While steps have been taken to account for limitations in the data, the authors note that the results should be treated with caution. Nevertheless, the findings contribute to our understanding of how family background affects educational outcomes and how this has changed over three decades.

The study uses data from the Youth in Transition (YIT) study and the Longitudinal Surveys of Australian Youth (LSAY) for the period 1975 to 2006 to examine the following relationships:

The relationship between young people’s tertiary entrance rank (TER) at 18—19 years of age and parents’ socioeconomic status in selected LSAY surveys between 1998 and 2009 is also examined.

The Youth in Transition project is a longitudinal study of four nationally representative cohorts of young people born in 1961, 1965, 1970 and 1975. The project followed respondents for ten years, interviewing them annually in order to study their transitions between school, post-school education and training, and work. In the Longitudinal Surveys of Australian Youth, annual interviews are undertaken with cohorts of young Australians, the aim being to study their transitions from school to further education or work. Data are available for cohorts of students who were in Year 9 in 1995 (that is, students who were born around 1981), 1998, 2003 and 2006. From 2003 the LSAY sample has been drawn from students who were respondents to the Australian version of the Programme for International Student Assessment (PISA).

The idea that young people’s educational and employment achievements should be a consequence of their efforts and abilities rather than their family background is an important measure of the efficacy of educational systems in both Australia and internationally. Although a number of Australian studies have examined the relationship between parents’ socioeconomic status and their children’s outcomes, there is a diversity of views about whether and to what extent recent generations of Australians have enjoyed greater intergenerational mobility than previous generations. While there is consensus that absolute mobility has increased; that is, each generation is better educated than the previous one, there is less agreement on whether relative mobility — children’s ranking in socioeconomic status compared with the ranking of that of their parents — has changed greatly. Perhaps the main reason for this lack of unanimity has been the fact that the blanket term ‘intergenerational mobility’ covers a myriad of indicators, all of which may not necessarily point in the same direction. In this analysis we focus mostly on this latter question. Our study is more contemporary than most other studies to date, with the most recent literature examining changes in intergenerational mobility up until the early 2000s. We examined both the ‘unadjusted’ relationship between parents’ socioeconomic status and their children’s educational outcomes (that is, not controlling for any other factors), and the ‘adjusted’ relationship (where we controlled for a range of factors, including students’ sex, residence in a metropolitan or non-metropolitan area, ethnic background, Indigenous status, school sector and school socioeconomic status1). Our findings can be summarised as follows:

These findings are significant in a number of respects. On the one hand, considerable increases in public expenditure on education in Australia since the 1950s have certainly allowed more Australians to reach their educational potential. The vast majority of Australian students now complete Year 12, compared with only a minority in the 1970s. On the other hand, the increased choice in education (for example, allowing state schools to attract ‘out of zone’ students or increasing subsidies to non-government schools), reinforced by greater spatial inequality between suburbs — the income gap between the richest and the poorest postcodes in Australia — is perhaps associated with a greater divergence in students’ educational performance. This can be seen in our findings of the growing strength in the association between school socioeconomic status and student outcomes from the 1970s to the present day.

Broader changes in Australian society may also have exerted contradictory effects. The expansion of education to people from lower socioeconomic backgrounds, the considerable resources given to schools with low socioeconomic status, and the increase in government cash transfers targeted at the most disadvantaged families should have had the effect of reducing inequality and promoting social mobility. But there have been very powerful factors working in the opposite direction. These include an increased demand by employers for educational credentials (the lack of a qualification is now more of a handicap in the labour market than was the case in earlier generations); a trend towards assortative mating (the increased likelihood that highly educated people will partner with other highly educated people and that people with few educational qualifications will also partner); and increasingly skilled migrant intakes (recent generations of migrants to Australia are on average more highly educated than the resident Australian population). All of these factors could have a dampening effect on intergenerational mobility.

However, it is also possible that the underlying features of Australian society are more important determinants of intergenerational mobility than social and educational policies and demographic changes. In this context, the findings in this report are consistent with the international evidence, which indicates remarkable stability in the level of intergenerational inequalities over time in different countries, despite changes in social and educational policies.

These findings have important implications for understanding how the background of Australian students affects their outcomes, and how this has changed over time. The findings that mothers’ highest level of education and occupation are now much more significant factors than they were previously is important for the study of intergenerational mobility. This is in part because research has historically mainly focused on the transmission of socioeconomic status from fathers to sons and in part because women’s increased educational and occupational achievement has become associated with a greater degree of assortative mating, which could in turn become a barrier to greater intergenerational mobility. Similarly, the finding that school socioeconomic status has grown in importance since the 1970s as a driver of intergenerational mobility is a pointer towards how educational and social policy might move forward to facilitate intergenerational mobility across future generations. A number of other experts on Australian education have made this point, but this study provides new evidence on the issue.

It is worth noting that, while the Youth in Transition and LSAY data are well suited to the task of examining changes in the relationship between parents’ socioeconomic status and their children’s educational outcomes, the data have a number of limitations. They include a high attrition rate in later waves of both surveys, comparability issues between earlier and later surveys, and less than comprehensive information on parents’ socioeconomic status; for example, no data are collected on parents’ income. While the analysis has attempted to take account of these limitations, the results should be treated with caution.

1 The combined socioeconomic status of the school population.

As was the case in the mid-1970s, socioeconomic status (SES) still remains a major influencer on sch… Show more

As was the case in the mid-1970s, socioeconomic status (SES) still remains a major influencer on school performance. Show less