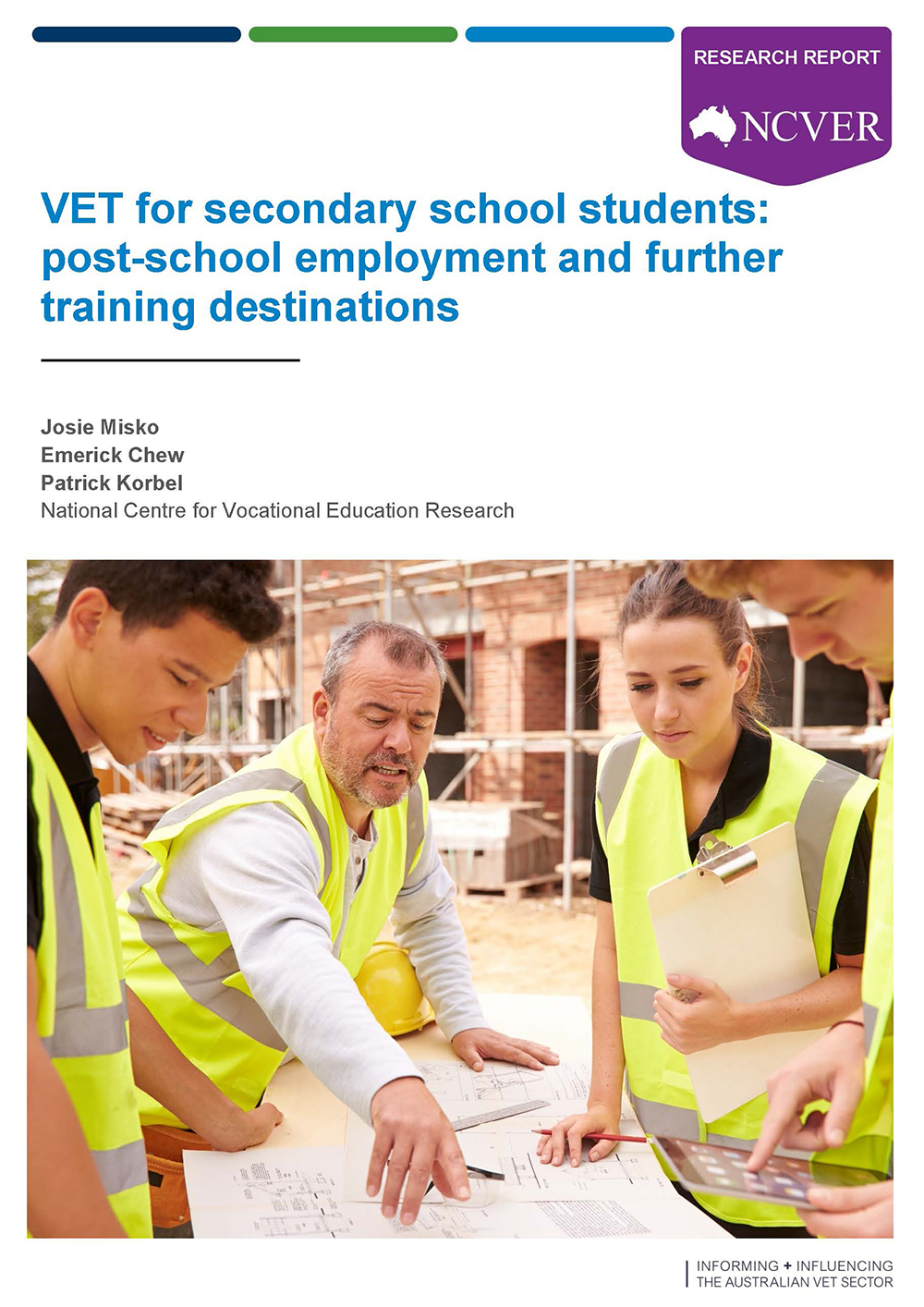 This research looks at secondary school students who undertook a VET for Secondary School Students program (hereinafter referred to as VfSSS) in 2011 and investigates whether they are in work and/or further studies five years later (2016), and the extent to which their VfSSS studies are linked to these employment and study destinations. The study uses an integrated dataset, in which data from the 2011 National VET in Schools Collection are linked to data from the 2016 Census of Population and Housing. It follows on from a similar exercise in 2017, whereby 2006 data from the National VET in Schools Collection were linked to the 2011 census. In doing so it enables us to update our earlier research questions with more recent information.

Having both these datasets available has meant that researchers have had access to a large number of observations on the destinations of VfSSS students from various demographic, cultural and educational backgrounds, including their employment and further training destinations and experiences.

Researchers also undertook an exploratory analysis of data from the Longitudinal Surveys of Australian Youth (LSAY 2009 commencing cohort) to enable comparisons between VfSSS and non-VfSSS students, in relation to their employment and educational situations between four and five years after undertaking their secondary school studies.

When analysing the LSAY data, it became apparent that caution needs to be exercised when looking at the outcomes of VfSSS and treating them as a homogenous group. A significant proportion (45.2%) of the VfSSS students in the LSAY sample also achieved an ATAR and a preliminary analysis indicated some significant differences between the outcomes of VfSSS students who achieved an ATAR and those that did not achieve an ATAR. Understanding the respective motivations and the type of training programs undertaken for these groups of students and comparing their outcomes are planned for a future study.

The aim of the VET for Secondary School Students program, formerly referred to as VET in Schools program, is potentially to give students an advantage by providing access to training that combines classroom-based learning with experience in actual or simulated workplaces. Importantly, the program also enables them to complete their secondary school studies. The benefits of the VET for Secondary School Students program (hereinafter referred to as VfSSS) can be assessed by the extent to which it prepares students for employment and further training — a measure favoured by industry and to some degree by government — and the extent to which it fulfils the objectives that schools have for their students in relation to this program. These include developing awareness of career options and gaining the skills and knowledge necessary for navigating their life and work journeys. On occasions these two purposes for VfSSS conflict.

This research looks at school students who undertook a VfSSS program in 2011 and investigates whether they are in work and/or further studies four to five years later (2016), as well as exploratory analysis of data from the Longitudinal Surveys of Australian Youth (LSAY 2009 commencing cohort) to enable comparisons between VfSSS and non-VfSSS students.

We look specifically at the employment and further training or education destinations and outcomes of students participating in these programs, including the type and level of training they undertake and the relevance of their VfSSS courses to the type of jobs they were employed in four to five years after leaving school.

Employment and training outcomes have remained relatively stable across the two time periods, with only small differences in the level of engagement between the 2006 and 2011 cohorts. In relation to the 2011 cohort:

The students from both the 2011 and 2006 cohorts who were most successful in finding work were those who had undertaken apprenticeship or traineeship programs at school. The least successful in finding employment for both the 2011 and 2006 cohorts were Indigenous students and those who were predominantly non-English speakers in the home.

Across both time periods just over a fifth of both the 2006 and 2011 cohorts enter the trades. Of the 2011 cohort who entered a trade in 2016, there were five times as many males as females, which is slightly higher than for the 2006 cohort.

However, they were less likely than non-VfSSS students to be employed in professional occupations.

Whether VfSSS study leads to jobs in course-related occupations is an important policy issue. We found that VfSSS studies in training package and non-training package areas led to employment across a range of occupations predominantly in technician and trade jobs, community and personal service work, and sales.

A significantly higher proportion of students undertaking VfSSS in trade-related courses obtained employment in course-relevant occupations following school compared with the general VfSSS population. In terms of the match between the intended occupational outcome of the course studied at school and the actual post-school occupation destination, four of the top six matches were in trade-related areas, ranging from 53% of students studying in the electrotechnology and telecommunication trades to 34% in the food trades. The other two occupational areas with a relatively high match rate were for sales assistants (45%) and carers and aides (33%). The lowest match rates were for creative arts workers (2%).

For most VfSSS studies, however, there is relatively low alignment between the intended occupations of the VfSSS qualification and the destination occupation.

Students from the 2011 cohort who undertook a school-based apprenticeship or traineeship as part of their VfSSS programs were also generally more likely than those who did not to be employed in the same occupation as the intended occupation of their studies. This is especially the case for the trades, but it is also true for those who have undertaken school-based apprenticeships and traineeships in a number of other occupational areas (including carers and aides, engineering, ICT and science technicians, general clerical workers, hospitality workers, other technician and trades workers, and sports and personal service workers).

By 2016 the great majority of 2011 VfSSS students, irrespective of their demographic and background characteristics, had completed a Year 12 or higher qualification. This was similar to findings for the 2006 cohort but there was an increase in the proportion of the 2011 cohort who were engaged in, or had completed, post-school study five years later, including:

The higher the level of qualification undertaken as a VfSSS program, the more likely it was that students had subsequently completed a post-school qualification2 or were engaged in further studies five years later.

A sizeable proportion of the 2006 and 2011 cohorts who had completed a post-school qualification had attained a bachelor’s degree or higher qualification, which based on preliminary LSAY analysis, predominantly reflects the group of VfSSS students who also achieved an ATAR.

Substantial proportions of those from both the 2011 and 2006 cohorts who continued with further studies often did so in the same broad fields of education, especially those who had studied in the more trade-related courses, such as engineering and related technologies, and architecture and building (in which around half of the VfSSS continued with the studies in the same area following school).

In our additional analysis using LSAY data, we find that there are statistically significant differences in educational outcomes between the students who undertook VfSSS studies and those who did not. For example, VfSSS students were more likely to have:

They were less likely than non-VfSSS students to have completed:

They were also less likely to be currently undertaking a recognised qualification, or a bachelor’s degree or higher qualification.

2 The ABS identifies non-school qualifications as ‘educational attainments other than those of a pre-primary, primary or secondary education level applicable to all persons aged 15 years or over’. For the purposes of this report we will refer to these as post-school qualifications, even though some may have contributed to the completion of a certificate of education. <https://www.abs.gov.au/ausstats/abs@.nsf/Lookup/2900.0main+features100742016>.

VET in schools prepares students for the future 8 April 2020

Secondary school students who undertake school-based apprenticeships and traineeships are among the most likely to be in full-time permanent employment five years later, according to a new report released today by the National Centre for Vocational Education Research (NCVER). Show less

This report explores whether VET undertaken by secondary students equips them with the technical and non-technical skills required to successfully participate in an ever-changing world of work. Show less

New research shows that five years after participating in VET in Schools, 87% of students were worki… Show more

New research shows that five years after participating in VET in Schools, 87% of students were working, studying or both. Show less