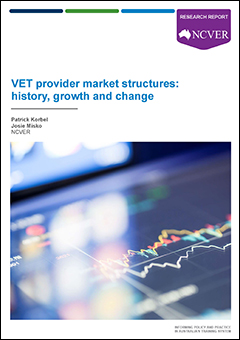 This report considers the past and present structure of the Australian vocational education and training (VET) market. Increasing competition in the VET sector over the last two decades means it is timely to understand how the market structure has changed.

This research builds on our understanding of the VET sector and the diversity within it. It also prompts important and fundamental questions about the current structure of the market and whether it is best placed to deliver the desired skills and knowledge that students and the Australian economy require.

The paper tracks the development of the Australian vocational education and training (VET) provider market over the last two decades in the context of significant policy changes and generally increased competition. It provides an insight into how the sector has arrived at its current position, painting a present-day picture of great diversity. More importantly, it prompts further, more fundamental, questions about the current structure of the provider market and whether it is optimally placed to deliver the skills and knowledge that students and the Australian economy require.

The now wider scope of the National VET Provider Collection has enabled reports on total VET activity (TVA). TVA data have been instrumental in this initial analysis of provider and student numbers, which builds on the paper Making sense of total VET activity: an initial market analysis (NCVER 2016).

The vocational education and training (VET) market in Australia has, by way of policy changes over the last two decades, been incrementally and increasingly opened up to competition. Initiatives and policy reforms such as the National Framework for the Recognition of Training (NFROT), user choice and the National Partnerships Agreement on Skills Reform, as well as VET regulation, have to a lesser or greater extent impacted on the number and diversity of training providers, including all TAFE (technical and further education) institutes, schools and community-based, enterprise, industry association and private providers.

This paper explores how these changes may have impacted on the numbers and structure of the VET provider market. We examine five aspects of this market to understand its historical and current state. We looked at:

We tracked the number of providers entering and exiting the market over the last 20 years using registration data from <training.gov.au>. Despite changes in policy and in funding regimes, the number of registered VET providers has remained relatively stable over that time. In fact, there have generally been fewer providers entering and exiting the system over the last five years than in the preceding 10 years.

We also found that private training providers comprise an increasing proportion of the new providers entering the market. There has also been a recent rise in the number of cancellations by the regulators.

Using data now available under the expanded National VET Provider Collection, along with new total VET activity (TVA) data (NCVER 2015a), we were able to compare the structures and characteristics of the VET market. For the first time we have a more comprehensive view of the VET provider market.

It has become clear that there is much diversity in the VET provider market. What stands out is that the market is characterised by a handful of larger providers with upwards of around 10 000 students and a substantial number of medium-sized providers with around 1000 students. However, there are nearly 2000 providers (around 40% of the total) with 100 or fewer students.

This large proportion of providers with relatively few students is striking and warrants future investigation. What factors have limited their growth? Do they provide niche training or crucial service in more isolated locations? How do they manage their operations? How can such diversity be effectively regulated? These issues immediately raise questions of the VET provider market’s comparability − its differences and similarities − with the higher education sector in Australia and also with comparable VET sectors in other countries.

The large VET providers (of all types, including public and private) with upwards of 10 000 students are similar in size to Australian public universities. The large group of medium-sized VET providers (with around 1000 students) are similar in size to Australian private higher education providers, although they are more numerous. However, there is not a substantial group of small to very small higher education providers, as seen in the VET sector, acknowledging that the sectors have inherent differences in students and missions.

There are nominally 3129 people per provider in Australia, compared with 15 725 people per provider in Ontario, at the other end of the spectrum. While the estimate of working-age population is soundly based, it is acknowledged that comparability of ‘providers’, given international institutional differences, is more problematic. This initial assessment, placing Australia at one extreme of providers per working-age population, requires a more detailed and complex analysis of provider size dispersion on a trans-national basis.

The VET FEE-HELP student loan arrangements are a more recent policy initiative, one that has seen significant growth, especially since about 2011−12. An examination of registration data reveals that 19 of the top 20 VET FEE-HELP providers in 2014 (in terms of numbers of students and amount of loans) were already in the market before the introduction of the scheme. While enrolments at these providers may have grown as a result of their being approved as VET FEE-HELP providers, the evidence indicates that these were established providers rather than new providers entering the market.

The structure of the sector may change as the market matures and further initiatives and reforms are implemented. As we collect more years of data with total VET activity scope, and our research uses this data, we will have a more complete view of the sector and the training market, their associated structures and performance.

This infographic addresses some common perceptions of the VET market structure.

This infographic addresses some common perceptions of the VET market structure. Show less

This first reporting of total VET activity has enriched our current knowledge of the VET market and begins to tell the story of Australia’s training market through preliminary analysis and comparisons of government-funded training providers, and private training providers. Show less

New analysis of the vocational education and training (VET) provider market explores whether its structure is optimal for Australia’s current and future skills needs given the distribution and demographics of the labour force, the variety and the requirement for uniform, quality training. Show less