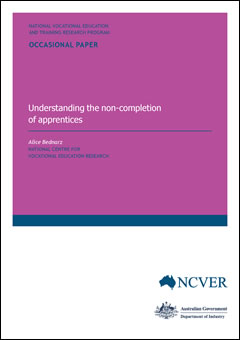 Understanding the non-completion of apprentices

Approximately half of all apprenticeship contracts in the trades are not completed. This literature review draws together existing research and data to find out why apprentices do not complete their training. The report finds that the most common reasons for not completing are employment-related. These include interpersonal difficulties with employers or colleagues, being made redundant, not liking the work or changing a career. The influence of the employer cannot be overstated. Employers with the highest completion rates are generally larger, experienced employers with well-organised systems for managing apprentices, while employers with lower completion rates tend to be smaller, and have less experience.

Sandra Pattison discusses some of the reasons why so many apprentices aren’t completing their training and what can be done to address the high attrition rate on ABC Radio National Life Matters program "Why apprentices drop out?" (recorded 26 June 2014).

Approximately half of all apprenticeship contracts in the trades are not completed. In this context, this review draws together existing research on why apprentices do not complete their training. The issue of non-completion is considered from multiple angles, including apprentices’ self-reported reasons for non-completion, the impact of employer characteristics, and apprentices’ and employers’ satisfaction with the training provider. The report is based on findings from surveys undertaken by the National Centre for Vocational Education Research (NCVER) and other national surveys, industry studies and research papers.